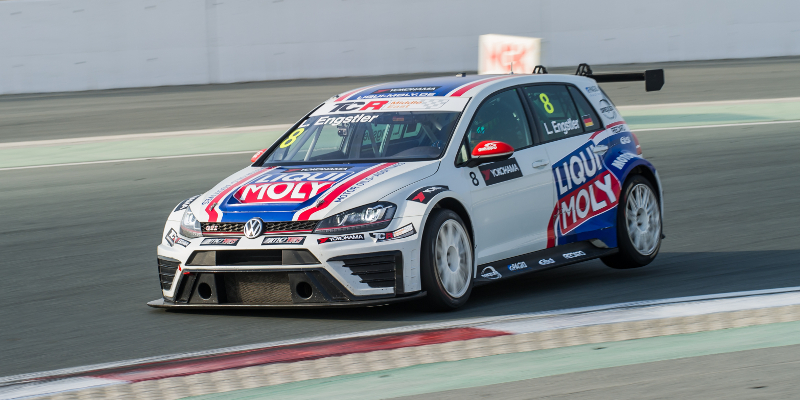 Liqui Moly Team Engstler’s Luca Engstler and Brandon Gdovic shared the spoils in the first two races of the TCR Middle East Series, which were held on Friday at the Dubai Autodrome in the United Arab Emirates.

At the start it was front-row man Mat’o Homola who took the lead from pole-sitter Engstler, a move which would later earn the Slovakian a drive-through penalty for a false start.

When Homola took his penalty on lap three it left Engstler in the lead of the race, having initially dropped to third behind the Top Run Motorsport Subaru of Luigi Ferrara.

Engstler then inherited the lead when the Subaru stopped on the track after two laps with transmission problems, ahead of team-mate Filip Sládecka.

On lap four, Mulsanne Racing’s Michela Cerruti then passed Sládecka for second in her Alfa Romeo Giulietta, a position which she would hold until the chequered flag at the end of the race.

Thrid went to Gdovic, whilst CadSpeed Racing’s James Kaye brought the brand new Audi RS3 LMS home in fourth, despite contact with Sládecka on lap nine that dropped the Slovakian out of the race.

Before the race began, pole-sitter Astin pulled into the pits at the end of the formation lap, leaving Goede to effectively start the race from pole.

When the lights went out for the reversed-grid encounter, it was Sládecka who took the lead after Goede stalled, dropping him to the back of the pack.

Sládecka initially lead from Kaye and Homola, whilst further back Cerruti overtook Gdovic for fourth, only to have the position re-taken by the American on the following lap.

The leading trio battled hard in the first few laps, whilst Gdovic closed up as they battled. On lap six Kaye overtook Homola for second, and the Brit then took the lead on lap nine when he passed Sládecka.

The Slovakian racer tried to retake the position on the following lap but the duo made contact and he couldn’t get past.

Kaye’s lead would be short-lived, however, as the Audi racer was informed that he had received a penalty, dropping him to third.

That handed Gdovic the lead on lap 11, after he had one lap earlier passed both Engstler and Sládecka to move into second, which became first with Kaye’s penalty and a pass on team-mate Homola.

When the chequered flag eventually flew, the win went to Gdovic ahead of Homola and Sládecka.

Top Run Motorsport were unable to start the race as a result of the transmission failure that befell Ferrara in race one, whilst Cerruti retired with broken suspension after eight laps and Astin stopped with a tyre problem after just two laps.