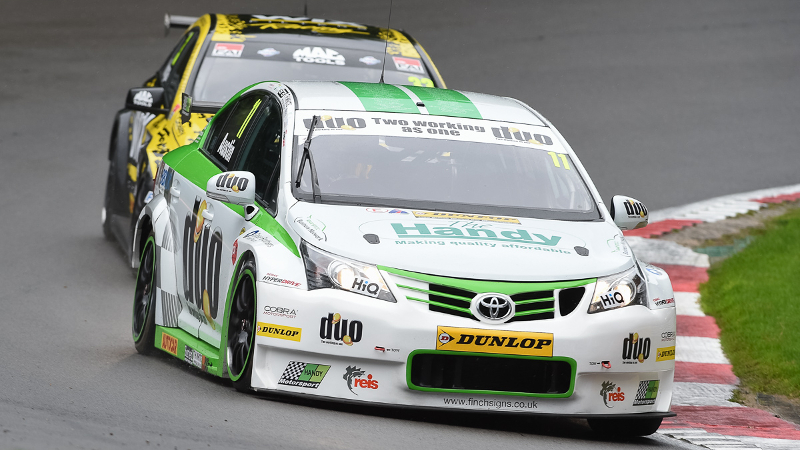 Handy Motorsport Team Principal Simon Belcher was full of praise for Rob Austin after the British Touring Car Championship season finale at Brands Hatch, as he scored a third podium of the year.

That qualifying pace set the tone for race one, as Austin was able to hold on to his second place behind leader Colin Turkington, despite significant pressure from the second Subaru of Jason Plato late in the race.

The result marked an improvement on the two third-place finishes Austin scored the team earlier in the year, and a best-ever result for the Handy Motorsport team.

“Unfortunately we didn’t have the pace to go with Colin, but we had the pace to hold off JP,” said Austin. “It’s a huge thing for all of us at Handy Motorsport and the car was amazing, thank you to the team for continuing to develop it to this point.”

Races two and three proved to be more challenging, as Austin retired from the second race with damage to his car, following a pass by MG’s Josh Cook.

That left Austin with a big task for the final race, but he persevered to take two points for 14th, having started in 29th on the grid.

The results meant that Austin finished the year 16th overall in the drivers’ championship standings.

Belcher later praised Austin for his efforts, which came at the end of a breakthrough year for the small team.

“In qualifying we showed we had the pace, and we were third fastest in free practice, but we knew the car was good after Silverstone so we came to Brands Hatch on a real high,” said Belcher. “The pace has been there since Snetterton at the halfway point of the season, that was a real breakthrough for the team. It’s absolutely fantastic to end the year back on the podium.

“It’s always a bit nerve-wracking when you’re at the front [in race one], we knew we needed to try and get past Turkington in the first two laps before his tyres came in.

“Rob hung it around the outside at the start, he tried his hardest to get the lead, and after that it was a case of managing the tyres and holding on to the second place.

“It wasn’t easy with a multiple champion breathing down his neck. Rob did a really good job to bring it home in second place – fantastic performance.

“Some things haven’t gone our way this season, like the punctures at Silverstone, but this podium makes up for that.”