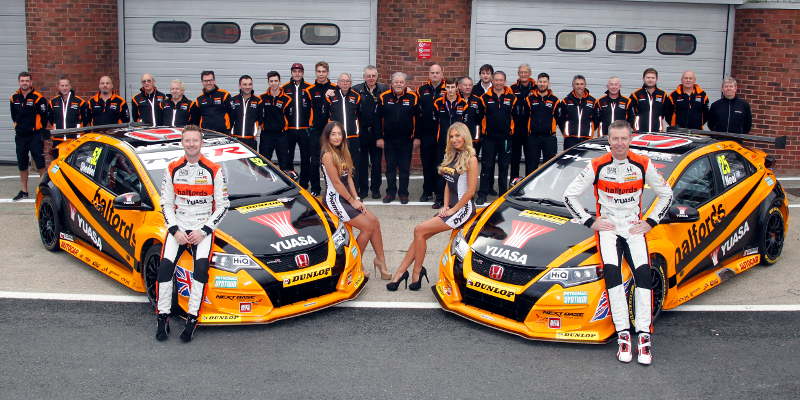 Matt Neal has welcomed his Honda team-mate Gordon Shedden to the ‘three titles club’ in the British Touring Car Championship, after the Scot successfully defended his crown at Brands Hatch on Sunday.

Neal had also entered the weekend in with a shout at the overall title, but the former triple champions hopes came to an abrupt halt in race two when he crashed head-on into the barriers after having moments before suffered a complete loss of power on his car.

The impact gave Neal a mild concussion, and he was ruled out of race three on medical grounds.

As Neal watched on, Shedden drove a masterful race to catch, and pass, main rival Sam Tordoff, despite running with a heavier car. The move gave Shedden his second consecutive title, and third overall, by just two points.

“First of all, huge congratulations to ‘Flash’ on his third BTCC crown,” said Neal. “He’s driven fantastically all season and it’s a pleasure to welcome him to the ‘three titles’ club – I guess now it’ll be a straight fight to see who can get to four first!

“Seriously, though, I’m chuffed for him and he thoroughly deserves it – if I couldn’t win it, there’s nobody else I’d rather see lift the trophy.

“It was obviously a shame about the way my season ended. We did a solid job in qualifying and closed in on the championship lead in race one, but then in race two, I suddenly lost power and as I was attempting to recover, I was pitched into a spin that ended up in the barriers.

“I got knocked around pretty badly and because I had mild concussion, the decision was taken not to start race three, which clearly wasn’t the way I wanted to end my championship challenge.

“I’ll just have to come back next year and try to win it again myself!”

The shunt and subsequent non-start saw Neal slip from third overall in the standings to sixth, 33 points behind his team-mate.

His non-start in race three also saw Halfords Yuasa Racing come up short in the overall Team’s Championship standings, where Team JCT600 with GardX beat them by just 17 points.