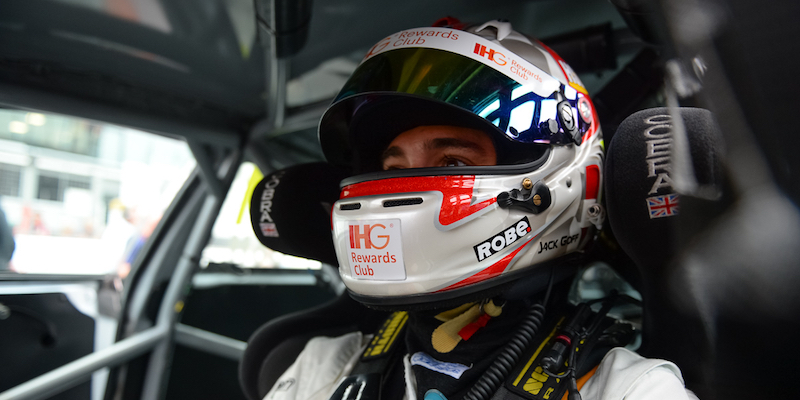 Team IHG Rewards Club’s Jack Goff has done a credible job for his first season in the British Touring Car Championship with rear-wheel drive machinery, but the High Wycombe driver is looking to remain in a team that he feels comfortable in.

“I’ve literally got zero idea, as you know about as much as I do,” said the BMW driver to TouringCars.net after the finish of the 2016 campaign, admitting that he will be out of contract in a matter of weeks.

“I would love to stay where I am, as I’ve never had the opportunity to do two years in the same car, especially having gone from front to rear-wheel drive. Front-wheel drive wouldn’t be ideal, as I’d like to stay with what we know.

“I’ve got to keep that continuity going, because you get to all your lads and I’ve got a great bunch of lads on my side of the garage. It’d be nice to be continue with that from here.”

Goff has been impressive in having to adapt to the dynamic change between front and rear-wheel drive, which is the same that team mate Sam Tordoff has also had to experience when he joined Dick Bennetts’ outfit in 2015.

“It’s been a frustrating year really, but the car, the BMW’s been great,” explained the 25-year-old, who ended up 11th in the standings at the end of the season.

“We’ve been hampered in a straight line, which I think showed a little bit in race one, when Josh Cook drove around the outside of me and defended the next corner.”

He was also quick to point out about the struggles that Sam Tordoff was unable to fight back in the final race, where eventual champion Gordon Shedden ended up fighting his way past, to take the title with a hard-fought third place.

“It was very difficult for Sam to race in the last one, where he couldn’t do an awful lot against it. He could get close in the corners, but lose out on the straight and not be close enough on the next braking zone.

“At tight, twisty tracks like Knockhill, we’re okay, but at the tracks with long straights, we lose out on.”

Even with BMW and IHG set for meetings in the coming months, according to Goff, he felt that a lot of luck this season would have been helpful, but it has been able to keep him motivated ahead of a 2017 campaign.

“I’ve got to still keep paying the bills. I’ll be working hard over the winter, towards a deal that will hopefully see me on the back of the grid from early next year.”