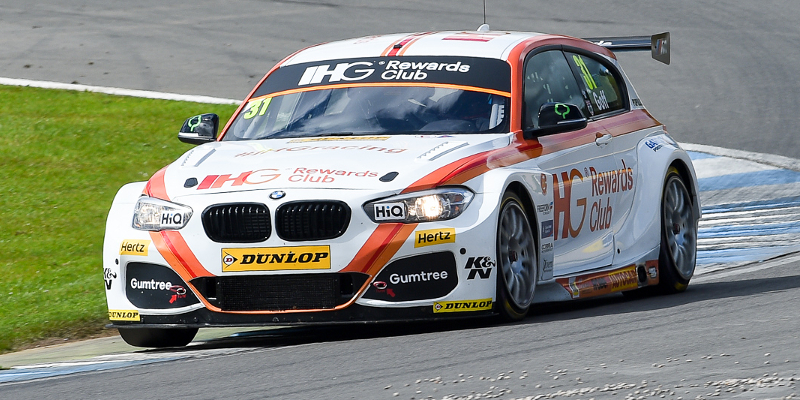 Jack Goff says he is ‘surprised’ to be the leading BMW driver after the second round of the British Touring Car Championship, with the Team IHG Rewards Club driver leaving Donington Park third overall in the standings.

Goff has had by far the most consistent start to the season of all of the WSR drivers, finishing all three races in the top ten – the only driver to have done so in 2016 thus far.

Donington Park again gave Goff a solid haul of points, with a fourth, fifth and sixth respectively in Sunday’s trio of races.

And it could have been even better in race three, but for the charging Honda duo who went on to win the race on the regular tyre whilst Goff was forced to run the less beneficial softer tyre.

“Fourth place in the opening race was a solid start to race day, although I think we could possibly have got into the top three without the safety car and then the red flag,” said Goff. “It meant a good starting position for race two though, and the car felt in really good shape.

“It got a little messy when I was racing with Tom Ingram and he pulled a move that damaged my car, but we still showed strong pace and it was another good finish.

“With the soft tyre in race three it was always going to be difficult to stay in the podium positions, and although the BMW was really strong, we were powerless to defend against the cars on the regular tyre towards the end.

“To finish the day with another top-six finish is positive, as is another fastest lap. I didn’t expect to be the top BMW driver in the points at this stage of the season, and hopefully we can continue our form at Thruxton.”

WSR Team Principal Dick Bennetts praised the 25-year-old, who despite being both new to the team and rear-wheel drive for 2016 has consistently delivered the strongest results for the team.

“Jack has again shown how important it is to be consistent this weekend and to make it six points finishes from six races this season is a very good start,” said Bennetts. “It’s clear to see this weekend that he is now more at one with the car and he has done an excellent job in each of the three races.

“Considering his lack of experience with rear-wheel-drive touring cars, he has driven with his head again at Donington Park and it’s fantastic for him to be third in the championship.”

Third-placed Goff, on 66 points, is just two points ahead of WSR team-mate and race two winner Rob Collard in the championship, with the third 1-Series of Sam Tordoff currently seventh a further eight points behind.