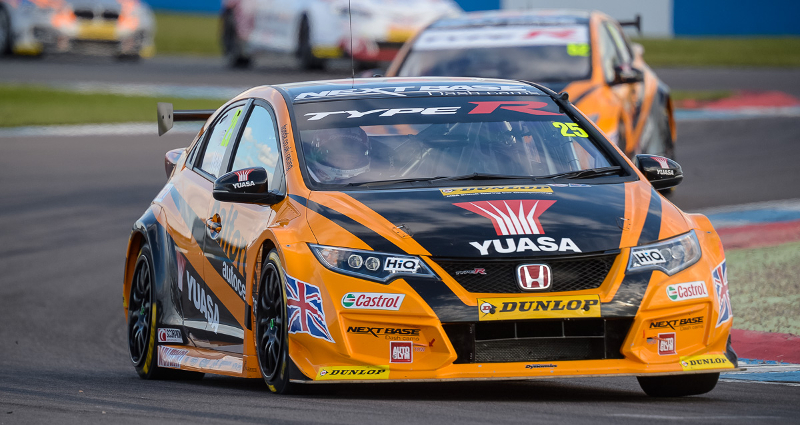 Honda’s Matt Neal and Gordon Shedden say they benefitted from playing a ‘longer-term game’ in the British Touring Car Championship at Donington Park, with the approach paying off and leaving them leading the championship.

Having qualified in fourth and ninth respectively for Shedden and Neal in an ever-changing qualifying session, the Honda duo knew that they would have their work cut out in race one with 75 kg and 66 kg on board for having led the championship going into the meeting.

Whilst race one was unspectacular – yielding two points finishes of 11th and 12th for the duo – that left them free of ballast for the second race.

Fourth and sixth duly followed in an exciting second race, before the reverse-grid in race three gave Neal a strong grid position of third, with Shedden lining up in fifth.

With pole man and early race leader Sam Tordoff running the less advantageous soft tyre, Neal was able to reel in the WSR driver over the course of the race to take a first win of the season, with Shedden following him home in second across the line for a second 1-2 result of the year for the team.

“Being championship leaders and with the associated success ballast, we came into this weekend knowing we would need to play a longer-term game,” explained Neal. “Our aim was to save the best ‘til last – and that’s exactly what we did.

“We bagged the points in race one, and then race two set us up nicely for the last one, with the reversed grid and the right tyres on both cars.

“It was great to come away with a one-two finish, and being my home circuit makes it even sweeter. It felt as good as my first BTCC win here all those years ago – I’ll never get tired of that feeling.

“To leave still leading the championship is the perfect outcome – I’ll accept 75kg ballast going to the next round with both hands!”

Incredibly, Shedden managed to score exactly the same number of points at Donington Park as his team-mate, leaving him remaining five points adrift in the championship battle.

The Scot added that he adopted the exact same strategy as Neal, which led to very similar results to his team-mate, with both drivers barely separated during the races.

“We knew we were going to have to take a bit of pain this weekend with so much ballast in both cars, and we decided to take that pain early on,” added Shedden. “It was always the plan that as Sunday progressed, we would get closer and closer to the front.

“That meant we were a little bit under the radar until the last race, but we kept fighting and plugging away and snatching points as and when they were available.

“It was very difficult in race one, but we kept our noses clean in race two to very nearly nick a late podium and then the car felt great in race three. We just had to bide our time until the soft tyres on the cars ahead faded, which we knew they would do.

“It was fantastic to end the weekend with a one-two finish.”