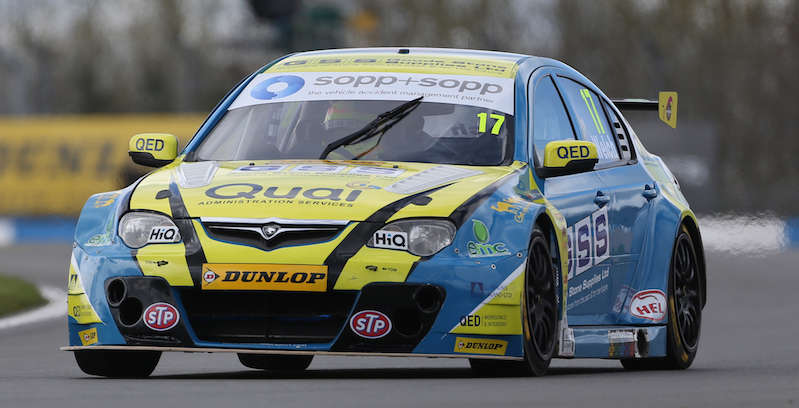 The second race weekend of the 2016 Dunlop MSA British Touring Car Championship season at Donington Park was one for Goodstone Racing’s Daniel Welch to forget, despite his Proton Persona showing promise in the earlier part of the year.

The 33-year-old spoke with TouringCars.net after the final race of the day, having explained that the car had the pace to compete and potentially score points this weekend.

“It wasn’t too bad for us here, but we didn’t get a chance to show it through practice and qualifying. We always seemed to be at the wrong place at the wrong time.”

Welch was only able to qualify 20th in a session that was very changeable, but steadily made his way up the field in race one towards a potential third points finish of the year until lap 13.

“We’d been working our way towards a good score of points, before we were removed from the circuit by a Mr. [Matt] Simpson.”

This incident, along with Team BMR’s James Cole’s Subaru catching fire, brought out the red flag in race one with just two laps left.

“In race two, we were suffering with damage from race one, and eventually had a left front puncture down at Craners, which ended it there and then. Even with a poorly car, we were still working our way forwards again.”

Welch was still able to finish the last race of the weekend, after two disappointing races that could have seen further progress being made.

“In race three with the soft tyre, we started last and from there, you’re not really going to make any progress.

“We were also suffering with a failing engine, getting slower and slower lap by lap, as well as the tyres getting worse as the race went on. All in all, it adds up and race three was a complete mess.”

The Aldershot driver has only raced at Thruxton twice over the past four seasons, with a heft crash during practice forcing Welch to miss the remainder of last year’s event.

“Thruxton is my favourite circuit and I love the place. It hasn’t been very kind to me, but hopefully, let’s see.

“I’ve got good expectations, but we’re not looking to win there. We’re looking to regularly score points, which we could have done easily, I think, but it didn’t go well at all.”

Welch is currently 19th in the drivers’ standings, level on points with Eurotech Racing’s Martin Depper, on five points.