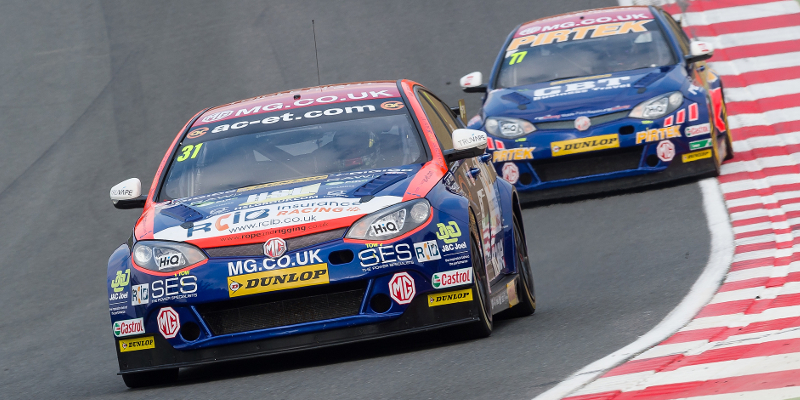 MG Motor UK has committed to the British Touring Car Championship (BTCC) for a further three seasons, with Triple Eight Racing continuing to compete with the MG6 model.

MG joined the BTCC at the start of the 2012 season with a pair of MG6 cars for Jason Plato and Sam Andy Neate.

Neate left the team after one season, with Sam Tordoff joining in 2013 for what would be a two-year stint at Triple Eight, culiminating in the manufacturers’ title in 2014.

Matthew Cheyne, Head of Sales and Marketing for MG, was pleased to be able to extend the partnership, which will have run for seven years by 2018.

“We are really excited to be renewing this partnership. The BTCC has given us the opportunity to give our brand some fantastic exposure, so we’re thrilled to be continuing this for another three years.

“We have built up a strong relationship with Triple Eight during our four years together, so we’re glad to be working with them again and look forward to developing a new team that will lead to more successes.”

“We’ve been very lucky to have worked with some extremely talented drivers over our time of being involved with the touring cars, but our plan is to grow our own champion over the duration of the contract. Driver announcements will be made soon, but we can confirm we’ll be looking to create a young and up-and-coming line up.”

The team will run an updated MG6 model at some point in the next three years, when the road-going counterpart is also given a refreshed look.

Ian Harrison, Team Principal at Triple Eight Racing, added that he was pleased to have extended the deal, despite his team having only secured one win in 2015 with an all-new driver line-up of Andrew Jordan and Jack Goff.

“We’re delighted to renew this important strategic deal,” said Harrison. “This year we saw an even more competitive BTCC and, while our drivers didn’t always get the results hoped, we took small comfort in the fact we had a year of zero mechanical and electrical faults; which is rare in this business and is an example of the high standards that Triple Eight prides itself on.

“That quality has been a deciding factor for MG, who are realising the opportunity that the BTCC offers and we’re looking forwarding to working on the new MG6 platform for the coming three years. I fully believe we can once again be strong contenders for every title on the table.”

More information about the team’s 2016 driver line-up will be provided in due course.