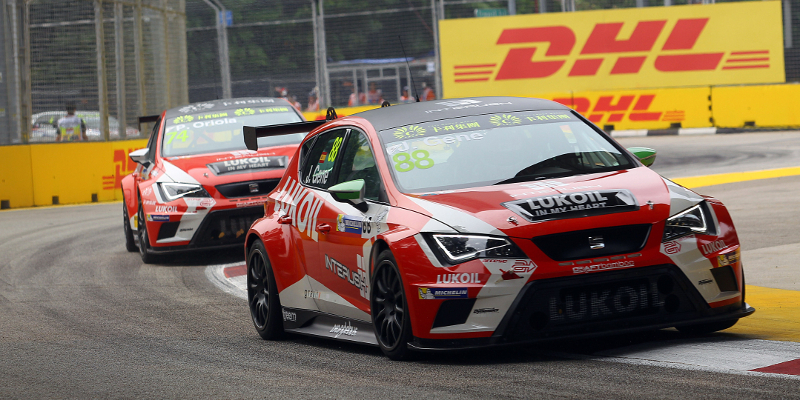 Craft-Bamboo Racing’s Jordi Gené took victory in the second TCR International Series race on the streets of Singapore with a controlled drive, ahead of Target Competition’s Stefano Comini.

Gené, who started on the front row of the grid alongside pole man Tomas Engström, leapt into the lead at the first corner after getting a stronger start than the Engstler Motorsport Volkswagen driver.

Thereafter Gené was able to open up a comfortable lead over Engström, who led team-mate Mikhail Grachev in the early stages of the race.

Pepe Oriola held an early third ahead of Target Competition title rival Stefano Comini, but the pace of the Swiss driver proved to be too much for Craft-Bamboo’s Oriola, with Comini passing Oriola for third on lap six.

The charging Comini then rapidly caught and passed Grachev for second on the following lap, with Oriola following through to complete the podium.

Fourth went to WestCoast Racing’s Gianni Morbidelli, despite the Italian continuing to feel under the weather in the hot and humid Singapore conditions. His team-mate Kevin Gleason finished in fifth, having enjoyed a close late-race battle with the Engstler Motorsport SEAT of Lorenzo Veglia, who took sixth.

Grachev himself finished in seventh after tumbling down the order in the final few laps, ahead of rookie Loris Hezemans in eighth.

Completing the top ten were Engström, who had earlier made a mistake and gone down one of the escape roads, and the third WestCoast Honda of René Münnich.

A late race incident for Craft-Bamboo Racing’s Sergey Afanasyev, who had been running in ninth position, dropped him to 18th place after contact with Engström.

In the TCR Asia Series, Prince Racing’s Michael Choi added to his win on Saturday by taking victory in class with 12th position, ahead of Roadstar Racing’s George Chou in 13th.

The Top Run Motorsport Subaru again took the start of the race, but Luca Rangoni retired to the pits after just four laps with mechanical issues.

The next event takes place in Thailand at the Buriram International Circuit on the 19th and 20th October, where the Asia Series again joins the International grid.