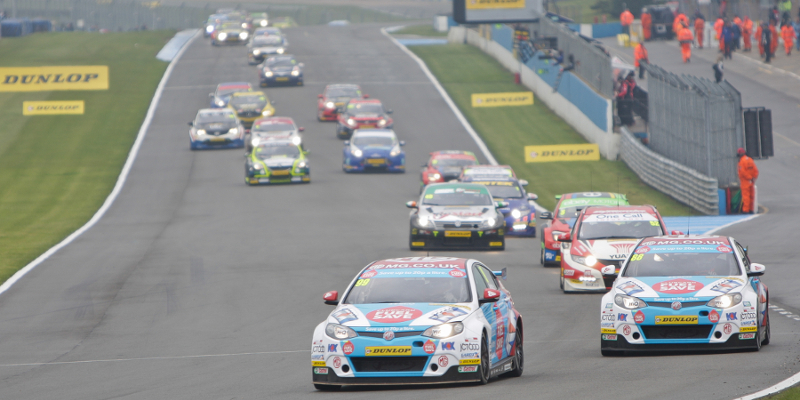 In what seems to have been a frenetic start to the 2014 British Touring Car Championship season, this weekend already marks the third meeting of what has so far proved to be a closely fought year.

While there was plenty of uncertainty ahead of the new season about who would be where in one of the most eagerly anticipated championships in years, one assumption we can make from the opening six rounds of the season is that consistency will be key in deciding who lifts the crown, with last season’s protagonists once again out in front this year.

Thruxton is the next stop on the 2014 calendar, as the series heads to the UK’s fastest circuit, which brings with it completely different challenges for the teams and drivers to what we’ve seen so far at Brands Hatch and Donington Park.

Tyres are the key difference this weekend, with the high speeds and demanding, abrasive nature of the circuit demanding a more durable compound from supplier Dunlop than any other track on the calendar, as the soft compound selection is dropped completely for the event.

Joint championship leaders Andrew Jordan and Jason Plato will be hoping for a reverse of their fortunes from 2013, as they both suffered punctures while in race winning positions. The pair are separated only by a victory count of two-to-one in Jordan’s favour, and the pair are likely to be jockeying for the points lead throughout the weekend, with a revitalised Plato full of confidence after he claimed his first win of the season at Donington a fortnight ago.

Those issues last year left the Honda Yuasa Racing team to collect all three victories, with Gordon Shedden’s race three win following a pair of triumphs for Matt Neal, and the factory team will be confident of  matching that result in one of Sunday’s races after Shedden scooped their maiden win with their Civic Tourer in the final race of the day at Donington with a last-gasp lunge past Colin Turkington.

With the competition as fierce as it has been this season, rounds seven, eight and nine might be a case of damage limitation for Northern Irishman Turkington and his eBay Motors team, with the circuit generally less favourable to their rear-wheel drive configuration that it is to the majority of their rivals. That said, the team have evidently made progress on their 2013 machine, and as ever we can expect Turkington to be at full speed when the lights go out.

One thought lingering in the paddock is if there will be another force to be reckoned with at the front this weekend. Tom Onslow-Cole dragged two podiums and a fourth place from his Volkswagen Passat last year, and with Aron Smith and two-time champion Alain Menu behind the wheel the pair are an outside bet for top honours at some point over the weekend, having both shown flashes of speed on more than one occasion already this year.

After we saw a 31-car field for the first time this season at Donington, 30 entrants will be listed this weekend as Robb Holland and Rotek Racing and still trying to count the cost of their race two incident at the Leicestershire circuit with James Cole. Although the United Autosports driver’s Toyota Avensis was written off in the crash, he will be on the grid weekend while Holland rebuilds his Audi S3 – but with the proverbial spring break following this weekend’s action, the American should have no trouble in making the grid at Oulton next month.