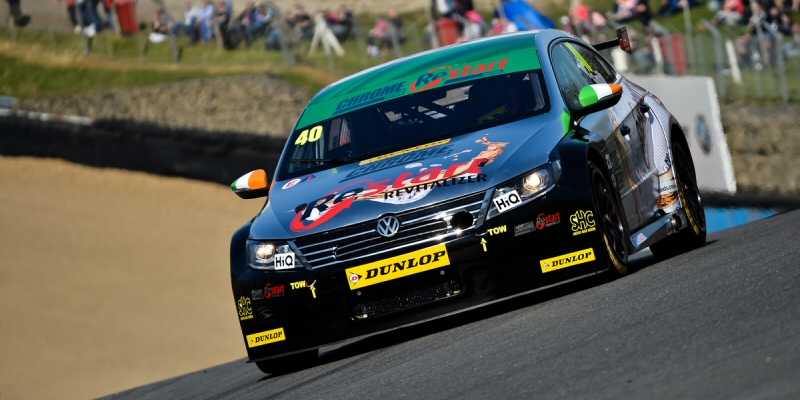 The Irishman had shown impressive pace at the opening round of the season three weeks ago at Brands Hatch, and hit the front a little after the halfway mark in the 40-minute session, setting a 1:10.079 before lowering his time to a 1:10.041, eclipsing the time Shedden set for pole position last year.

The session got off to a quiet start, with the majority of the cars heading straight back to the pits after their opening lap on the circuit, as only Glynn Geddie, Fabrizio Giovanardi and Aiden Moffat contiuning round to complete a time – although their respective efforts of 1:22.722, 1:31.542 and 1:36.942 were unrepresentative.

Shedden was the first to attempt anything close to a fast lap, setting a time of 1:11.690 before shaving another second off that attempt with a 1:10.539. He was then followed by Sam Tordoff and Andrew Jordan, who both dipped under the 1:11s barrier.

Smith then came through to set his lap, and he remained at the top of the times for the remainder of the session, setting his fastest lap with seven minutes to go. Shedden eventually came through to finish second, 0.174s behind the pace-setting time with a 1:10.215, while Colin Turkington was third, just over four hundredths further back.

Matt Neal confirmed his Honda team’s suspicions that they would be more competitive at Donington, as he completed a 2-4 for the team, while Marc Hynes’ second weekend in the series looks to be a happier affair for the 1999 British F3 champion, as he headed an MG 5-6-7 with Jason Plato and Sam Tordoff closely behind.

However Hynes was also involved in an incident with Jack Clarke early on in the session, which saw the Crabbie’s Racing driver finish the session second slowest, more than six seconds off the pace.

“It ruined my tracking,” said Clarke to TouringCars.Net of the contact with Hynes. “We came in and the tracking was out for the rest of the session so we tried to fix the problem before the end of the session but we couldn’t. Having not had the session at all it’s going to be a real struggle.”

Hynes was quick to accept the blame for the incident, admitting: “I thought I was in the middle of the road but clearly I wasn’t. We were both going out warming up tyres and he came over to the right, off-line, and I came on the racing line and came back to the middle of the road and obviously we touched. I take full responsibility.”

Jack Goff and Alain Menu has quiet but productive runs to eighth and ninth respectively, while Adam Morgan rounded out the top ten in his WIX Racing Mercedes A-Class.

Aside from the Hynes and Clarke incident, there were no major incidents of note in the session, with the field more spread out on the circuit and one second covering the top thirteen cars.

Lea Wood suffered a cylinder problem prior to the session but was able to get out on track, but Dan Welch’s miserable start to the season continued as a gearbox issue thwarted his hopes of taking part in first practice.

Second practice gets underway at 12:30 BST.