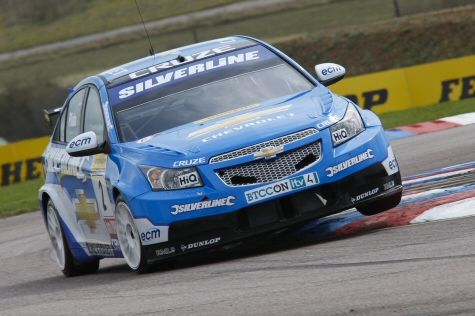 Jason Plato is confident of starting his championship challenge at Rockingham in three weeks time after admitting that his team played it conservatively at Thruxton due to the circuit’s notoriously hard nature on tyres.

Whilst other drivers fell by the wayside with tyre problems, most notably the two works cars from rival entry Honda, Plato and new team-mate Alex MacDowall suffered no such problems and they leave Thruxton top of the manufacturers standings.

“It’s always tough here, and this is the Vauxhall hunting ground,” said Plato to ITV after the race. “We played it conservative with the tyres, because it is hard here on them. The game plan for us was to finish strongly. Second place is a lot of points; it’s a good start to our campaign.”

The experienced Plato, who finished runner-up in last year’s championship, admitted that despite not winning at Thruxton he was satisfied with his weekend’s performance, which included a 2nd, 4th and 3rd position respectively. “I set myself a target of 30 points and came away with 31,”he said. “Our championship campaign starts in earnest at Rockingham – there, we’ll be really going for it.”

The first race of the day saw Plato starting from fifth in the first race for the new Chevrolet Cruze in the BTCC. With the demise of the two pace-setting works Hondas in front, and a solid pass on Andrew Jordan, the former champion was able to take a comfortable second place in the opening race of the day.

The second race was another strong one for Plato until coming under pressure from Matt Neal two laps from the finish. As the two drivers went into the chicane together they made contact and Plato was lucky to escape without completely spinning the car. However the time loss was already significant enough for the former champion to drop from second to fourth, after Paul O’Neill seized the opportunity to take the final podium spot behind eventual winner and second-placed Neal.

Despite their reputations with each other, Plato admitted that he had been partly to blame for the incident with Neal. “Matt had such a good run, so I knew he’d have a go,” said Plato. “I thought, I’d let him come round the outside of me and I’d hold him out as long as I could, so he wouldn’t be able to get up the inside. But it didn’t quite work.  As we got onto the brakes, I lost the rear of my car, so it sent me in to him and it was game over.  I was trying to be crafty but it was a bit of a mistake from me.  It would have been nice for a second,but we’ll take fourth.”

Meanwhile BTCC newcomer Alex MacDowall had a solid weekend for the RML-run team, finishing in the points in each of his first three races with 7th, 6th and 9th places respectively. However it was a learning weekend for the Clio Cup runner-up last year, as despite starting from fourth in race three he found himself fighting for position after ending up in 14th due to a slow start.

“It was a little daunting at first,” said 19-year-old MacDowall. “I was thinking I’m on a grid surrounded by BTCC drivers, and they’re not renowned for being gentle, but after the first two races I really settled in.

“The car is great – it has a lot of straight line speed, and I’m sure that with the RML team behind us, as well as Chevrolet and Silverline, we can get plenty more out of it as the season progresses.”