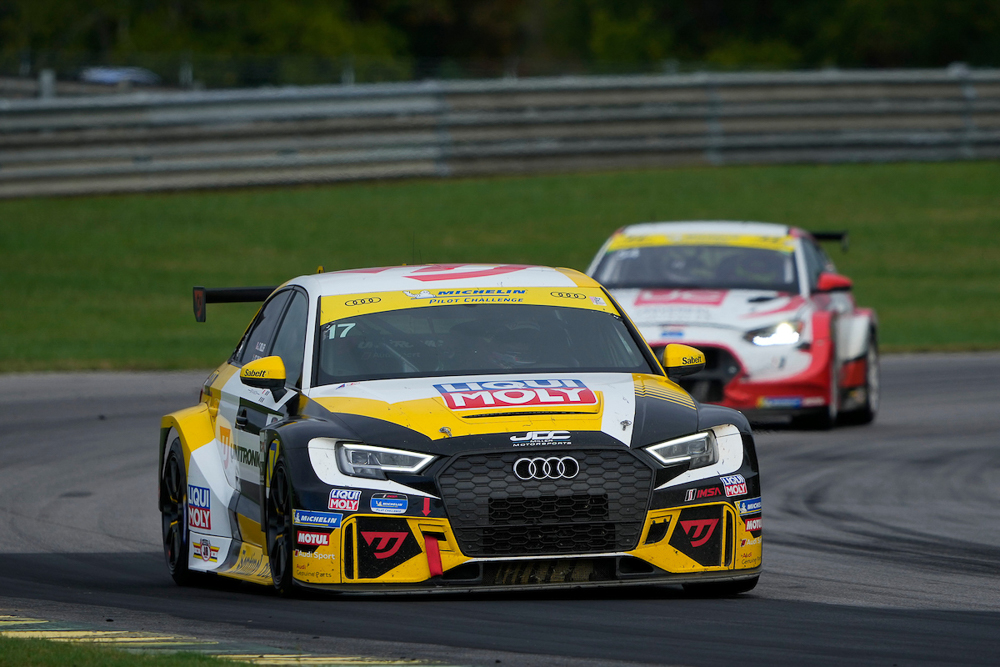 Having started on the fourth row, Chris Miller ran wide at turn one in the #17 Audi RS 3 LMS on lap three, but managed to remain in the top 10. Thereafter, Miller managed to run consistently in the top eight, and had even climbed up to 3rd when a full course yellow, brought out to remove debris at Oak Tree, led to the TCR field’s mandatory driver change. A rapid turnaround from JDC-Miller MotorSports allowed Mikey Taylor, now in the hot seat, to pick off Atlanta Speedwerks and Copeland Motorsports in a closely fought final stage to finally hit the front. Though harried by his nearest rivals, Taylor managed to build a 2.4s lead by the time the #17 Audi RS 3 collected the chequered flag.

This marks JDC-Miller MotorSports’ second win of the season after its triumph at the Daytona season-opener.

In a metronomic (and quiet) run, Michael Johnson Racing (#54) secured its second TCR podium of the season in 2nd, its best result of the year. Like Chris Miller, Michael Johnson also started on the fourth row, but made an electric charge to jump up to 4th inside the first 10 minutes. Dropped to 7th on the road after a slow pit stop, an impressive run from Stephen Simpson saw the #54 Hyundai Veloster N pick off six places in the frenetic closing stages.

Polesitter Bryan Herta Autosport w/ Curb-Agajanian (#33) followed up its win at Laguna Seca with 3rd place at VIR. Despite being jumped by a rapid-starting Copeland Motorsports (#27) in the opening stages, and later by New German Performance (#44), Harry Gottsacker nevertheless kept both the Hyundai and the Audi in his sights during the opening stages. The #33 Elantra N rarely dropped more than half a second behind the leader across the opening 45 minutes, and briefly hit the front when the TCR field caught the GT division’s back markers. Mark Wilkins emerged from the team’s only pit stop in 4th, a solid run, plus misfortune for Atlanta Speedwerks, allowing Bryan Herta Autosport to secure the final step of the podium, despite a late-race surge from Copeland Motorsports.

The latter had at one stage looked set to take victory at VIR, leading most of the opening hour after a decisive move for the lead on lap one, and again after a fast pit stop. A robust pass for position by Chris Miller at Oak Tree however ended up pushing the Copelands Hyundai wide onto the grass. Now 5th, a hard-charging Tyler Maxson managed to pick off the second Bryan Herta Autosport Hyundai (#77) on the final lap to claim 4th, achingly close to what would have been a well-deserved podium.

Despite the last lap heartbreak, 5th place for the #77 Veloster N further strengthens Taylor Hagler and Michael Lewis’ position at the top of the TCR standings. The duo’s nearest rivals coming into the event – the third Bryan Herta Autosport entry for Parker Chase and Ryan Norman (#98) – endured a torrid qualifying session when the Veloster hit the barriers hard, and though the heavily-repaired Hyundai was able to take the start (after three and a half hours of work, and with a bonnet borrowed from an Elantra showcar in the paddock), a loose turbo pipe meant the Hyundai made two additional pit stops en-route to a disappointing 11th. Only a catastrophic race at the season finale at Road Atlanta can prevent Hagler and Lewis from securing this year’s TCR title.

Early leader New German Performance (#44) finished what turned out to be an underwhelming 6th on its season debut. Having qualified an impressive 3rd, Tristan Herbert was quickly up to 2nd in the early going and took advantage of Copeland’s Tyler Gonzalez being blocked by traffic to take the lead on lap 13. The team’s decision to change all four tyres on the Audi RS 3 LMS however did not pay off, New German Performance slipping from 3rd to 9th, and recouping only three places on fresh rubber en-route to 6th ahead of Atlanta Speedwerks (#84). The Honda Civic Type-R had been running 2nd heading into the closing 30 minutes, and was also among the lead quintet in the early stages of the race. A rare mistake from Ryan Eversley though saw the Honda dip a wheel on the exit of turn 10 and bury its nose in the tyre barriers at Oak Tree. Eversley was able to continue, but could only reclaim positions from Rockwell Autosport Development (#15) and VAN DER STEUR RACING (#19) to secure 7th.

Frustrations for KMW Motorsports with TMR Engineering (#5) began on lap two when a connector on the Alfa Romeo’s steering wheel came loose, and though Tim Lewis was able to keep pace – and even briefly unlap himself – during the closing stages, time lost to the earlier mechanical issue proved too great to overcome, and the Giulietta Veloce eventually had to settle for 10th.

An off-track moment for Victor Gonzalez ended up dropping VGMC Racing, LLC (#88) out of the top five in the early stages, an error that ultimately proved futile when the Honda later retired with engine issues. Copeland Motorsport’s second entry (#51) similarly would not make the distance, though both fared better than Road Shagger Racing (#61), which managed just three laps before being pushed behind the wall with terminal drivetrain gremlins.

Mikel Azcona ‘very proud’ of progress made this season

Mikel Azcona ‘very proud’ of progress made this season

Esteban Guerrieri elated with podium brace during ‘do or die’ weekend