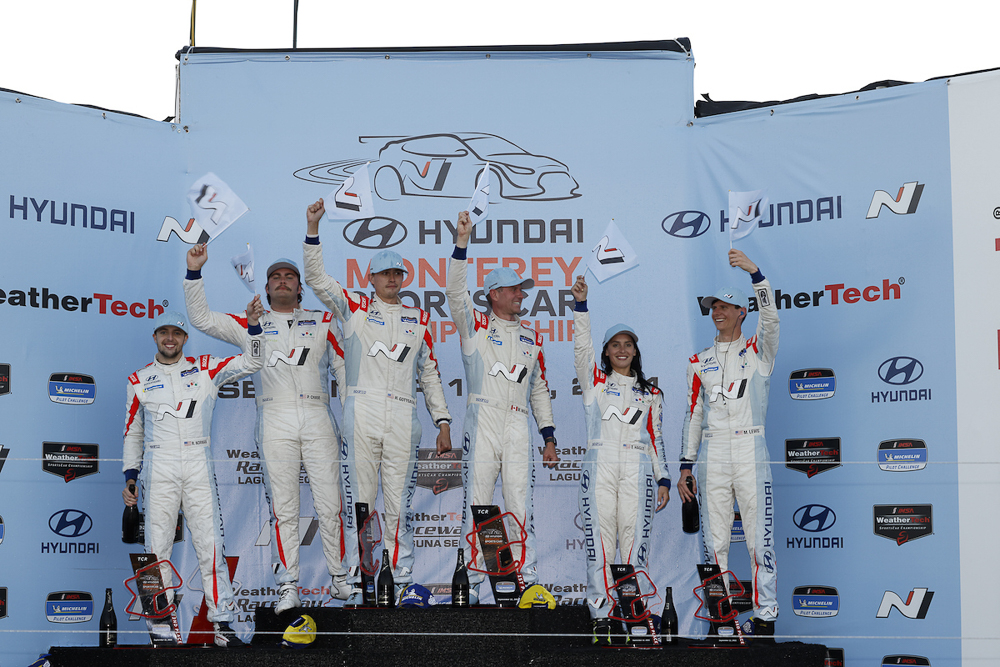 Mark Wilkins and Harry Gottsacker secured their first TCR win of the season in the Michelin Pilot Challenge at the head of a Bryan Herta Autosport w/ Curb-Agajanian 1-2-3 at Laguna Seca. Wilkins eventually secured the win in the team’s #33 Hyundai on the penultimate lap after a frenetic 20-minute on-track battle with long-time leader Parker Chase in the sister #98 Elantra N.

Having diced for the lead during the opening stages of the race, and despite gapping the rest of the TCR field by more than five seconds, both the #98 and the #33 were leapfrogged during the first of two pit stops by VAN DER STEUR RACING (#19). Hindered briefly by the Michael Johnson Racing Hyundai (#54) arriving on pitroad, both Chase (#98) and Wilkins (#33) then had to pass Denis Dupont in the VAN DER STEUR RACING Veloster (#19) on-track to re-take the lead. Having done so, the pair disappeared more than 20 seconds up the road and engaged in a battle for the lead across the final 30 minutes of the race, 1st and 2nd rarely separated by more than half a second.

The decree from the team garage? No team orders, “but both better finish!”

After a sensational run, Wilkins finally got the job done on the inside of turn four on the penultimate lap, and went on to collect the chequered flag. The result marks the first podium and victory for Wilkins and teammate Harry Gottsacker this season, and the third for Bryan Herta Autosport.

Behind a sensational battle for the lead, the third Bryan Herta Autorsport Hyundai (#77) came out on top of a similarly fraught fight for the final podium spot against Unitronic JDC-Miller MotorSports (#17) and VAN DER STEUR RACING (#19): at one stage, all three tin tops were split by just under one second. Heading into the final 15 minutes, Michael Lewis managed to jump both the Audi and the Veloster to take third, and was quickly on a charge. Lapping more than two seconds quicker than the battle for the lead, Lewis eventually finished just four seconds behind the #98 and #33 entries having started the run more than 20 seconds adrift.

The podium secured Bryan Herta Autorsport its first TCR clean sweep in the Michelin Pilot Challenge this season, and ensures both Lewis and teammate Taylor Hagler maintain their lead at the top of the championship standings.

Unitronic JDC-Miller MotorSports (#17) finished a bittersweet 4th after a tough event at Laguna Seca. Earlier this afternoon, Chris Miller had secured pole position aboard the #17 Audi by a ludicrously slim 0.017s, but a post-qualifying penalty for exceeding maximum camber settings ended up sending the RS 3 LMS to the back of the grid. JDC Miller’s start then went from bad to worse when Miller, having already made up three positions, was punted off-track at turn three in a clumsy manoeuvre by Gavin Ernstone, the Road Shagger Racing Audi (#61) having gone for a gap on the inside that was closing rapidly. Ernstone was deemed at fault and served a drive-through penalty.

The recovered Audi, despite falling half a lap adrift of the rest of the field, judiciously used a prolonged full course caution, quick pit stops and fast laps around the Californian circuit to work its way back into podium contention.

Road Shagger Racing meanwhile endured further problems shortly afterwards when the back end of the Audi stepped out at turn six, sending Ernstone nose-first into the barriers. The Nevada-native was able to continue though en-route to a frustrating 8th.

Behind the top four, early leader VAN DER STEUR RACING rounded out the top five ahead of the Michael Johnson Racing Hyundai Veloster (#54).

A bold pit stop gamble didn’t quite pay off for Copeland Motorsports (#51). Opting to go the distance on just one pit stop, as opposed to every other TCR frontrunner that pitted twice for new tyres, Mason Filippi continued to hold the top spot heading into the final 30 minutes only to be picked off by the two lead Bryan Herta Autosport Hyundais. The fuel-starved, tyre-worn Veloster N eventually fell off the TCR podium altogether after being systematically picked off by JDC-Miller MotorSports, VAN DER STEUR RACING and Michael Johnson Racing, but completed its run in a hard-earned, well-deserved 7th place.

A wretched weekend for Atlanta Speedwerks saw both Honda Civic Type-Rs round out the overall TCR top 10, albeit from the pitlane. The #84, which started 6th, had at one stage run 2nd after going off-strategy but fell back through the field when the Civic Type-R briefly conked out on the exit of turn two. In the pits after its brief drama, the Honda was then served a drive-through penalty for leaving the box with equipment still attached to the car. On the other side of the garage, the #94 had already suffered a heavy shunt and limited running heading into the race. Despite climbing up to 7th at one stage, the Civic then suffered a power steering failure, a dislodged boost pipe, and a puncture and, ironically, was also served a drive-through penalty when Ryan Eversley inadvertently spun the rear wheels while the car was up on its jacks. Neither Honda returned to the track after this.

The beneficiary of polesitter JDC-Miller’s penalty, the second Copeland Motorsports Hyundai (#27) led TCR on the opening lap only to be run off the road at turn 10 by the Riley Motorsports Toyota Supra on the very next tour (incredibly, in the space of two laps at Laguna Seca, the TCR field had already lost its first two ‘leaders’). Though the damaged Veloster was able to continue, it was eventually retired at three-quarter distance whilst running 11th.

VGMC Racing (#88) and Road America winner KMW Motorsports with TMR Engineering (#5) were early retirements with suspected drivetrain issues, a bitter blow for Roy Block and Tim Lewis who came into the weekend joint-second in the TCR class championship standings.