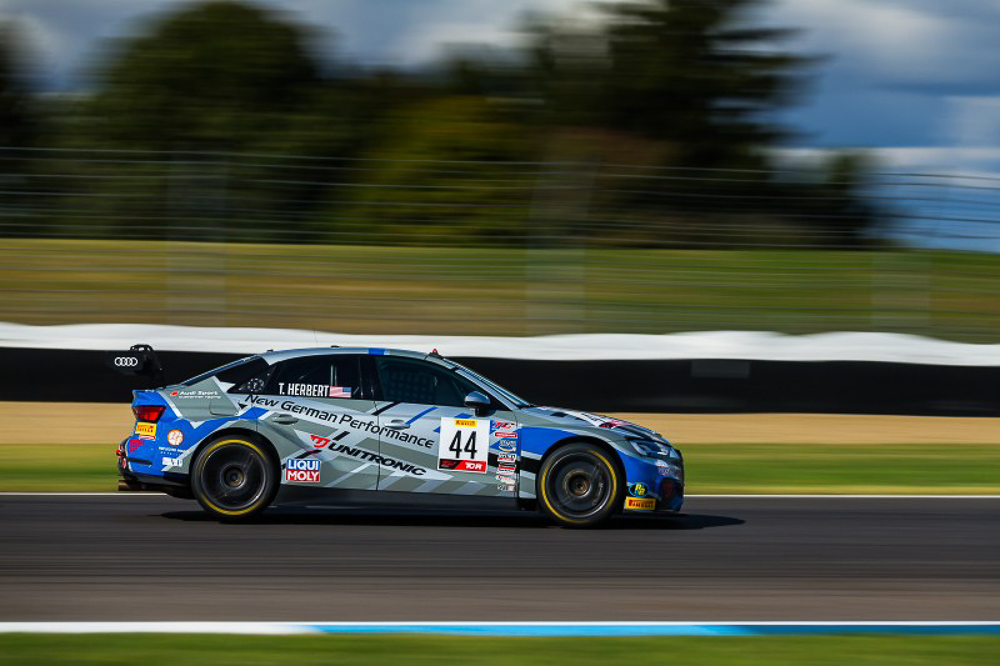 Smithson had secured his first pole position of this year’s TC America season yesterday aboard the #17 DXDT Racing Honda Civic Type-R, but found himself out dragged down Indy’s start-finish straight by the quick-starting Lewis Jr on row two. The #55 KMR Motorsports w/ TMR Engineering Alfa Romeo Giulietta then swept around the outright of turn one to assume the lead with Smithson slotting in behind

Though Lewis Jr held the lead thereafter, the pace of the Civic Type-R through Indy’s technical infield meant Smithson was soon back on the Alfa’s tail, the latter even setting the race’s fastest lap – a 1m 33.633s – in the process. Smithson’s charge eventually came to naught though.

In an attempt to lap TC leader Kevin Boehm at half-distance, Smithson went far too dep into turn one, clattering into the side of Lewis’ Alfa in the process. The leaders were out on the spot, the carnage, plus a rogue wheel from the Alfa on the racing line, bringing out the event’s first and only safety car. Things got heated when a clearly furious Lewis Jr confronted Smithson shortly afterwards, but fortunately both drivers refrained from dealing with the matter physically.

With the leader now out, Tristan Herbert assumed the lead, and while the New German Performance driver – making both his and the German team’s first TC America start since round two at Virginia – was under enormous pressure in the closing stages by a charging CJ Moses, the #44 Audi Sport RS3 LMS was able to hang on to collect victory.

Victor Gonzalez Jr completed the TCR podium aboard the #99 Honda Civic Type-R TCR. The VGMC Racing driver dropped it on the exit of turn eight on lap one after making possible contact with DXDT Racing’s Olivia Askew (#29), the latter also looping round on the exit of turn nine. In her attempt to recover the spinning Honda, Askew came achingly close to collecting newly-crowned TCR champion Tyler Maxson, forcing the #74 Hyundai Veloster N to take to the grass to avoid contact.

Oddly, her near-miss with Maxson was the second incident for Askew on the opening lap. The DXDT Racing driver had attempted to dive up the inside of Roy Block’s Alfa Romeo Giulietta (#5) at turn two on the opening lap only to send Block spinning into the grass. Ironically, Askew would attempt the same move in the closing stages, albeit successfully, to briefly take 3rd from Gonzalez Jr. at the restart, though she would eventually slip back behind the #99 Honda to 4th. Vinnie Lima (VVL Systems & Consulting, #88) rounds out the overall top five.

Following his contact with Askew, Block would later suffer a tyre blowout on the back straight, leading to the Alfa’s retirement. In cruel irony for KMR Motorsports w/ TMR Engineering, moments later Lewis Jr was nailed by Smithson.

A sedate weekend thus far for Tyler Maxson came to an early end when the Copeland Motorsport cruised onto pitlane after just two laps.

Kevin Boehm sealed the TCA class championship with his fifth win of the 2020 TC America season. The Boehm Racing team leader started from pole position and was already well out of reach when MINI JCW Team teammates Tomas Mejia and Mark Pombo went three-wide into turn one on the opening lap with Eric Powell. The TechSport Racing driver started alongside Boehm on the front row but quickly proved that three into one doesn’t fit at turn one as the #22 Subaru BRZ tS was tipped into a spin by the MINIs on his flank. Having recovered, Powell eventually finished 7th, albeit one lap adrift of the class leaders.

Mark Pombo (#61) also survived his brush to finish 2nd following a race-long duel with Powell’s TechSport Racing teammate P.J. Groenke (#25), the latter completing the TCA podium in 3rd. Despite their turn one contretemps, Mejia was also in the mix for the TCA podium but suffered a spectacular exit from the race 15 minutes in when the #60 MINI hit the kerbs hard at turn 12, sending the Cooper JCW up onto two wheels and almost onto its roof. Though Mejia mercifully managed to avoid capsizing, the MINI was left cruising back to pitroad with clutch failure.

Mejia’s demise meant long-time championship contender Tyler Gonzalez (Copelands Motorsport, #57) finished a solid 4th in TCA just ahead of VGMC Racing’s Jonathan Newcombe (#178). Mejia’s MINI teammate Clayton Williams (#62) had also been on course for a top five finish only to be collected by VGMC Racing’s Ruben Iglesias (#8) into turn one with just two minutes left on the clock. The impact was heavy enough to blow the Honda’s bonnet completely open against the windshield, though fortunately both drivers emerged unscathed.

Mathew Pombo took victory on his maiden TC outing of 2020 in TC America after a fighting drive from 5th on the grid, though an incident for standings leader James Clay means the TC title chase will go down to the wire tomorrow at Indianapolis.

However, with just seven minutes left on the clock, and having already been jumped at the re-start by title rival Toby Grahovec, Clay found himself on the outside of the lapped Ally Raphael (Classic BMW, #82) at turn one, the lightest of touches sending Clay’s Bimmerworld M240iR Cup into a spin on the exit of turn two. Though he dropped as low as 10th in-class, Clay did manage to salvage 8th on the final lap, but lost almost half of his championship lead in the process to Grahovec (Classic BMW, #26), who went on to finish 2nd behind Pombo.

Johan Schwartz meanwhile completed the TC podium after a fighting drive. The 2019 TC-class champion dropped out of title contention after a miserable weekend at COTA but nevertheless collected his first podium since round four at Road America.